Why do you need apps when your website is mobile friendly?

When outlining her “five big things” for 2016, Nikki Baird, of Forbes, outlined how retailers will look increasingly towards apps, after previously, in many cases, adopting the attitude that they are broadly the same as mobile-friendly websites.

So what is going to prompt this change? According to Baird, developers are re-imagining the capabilities of apps and finally see them for what they truly are; something capable of offering much more than you would find on a mobile-first website. We are going to take a look at just why mobile apps can be better than mobile-friendly websites…

If you’re in retail then apps offer something that mobile sites can’t – personalisation. Rather than a “one size fits all” approach, you can actually tailor your communication using an app: basing the messages you send on the user’s location, behaviour and interests.

Generally speaking, mobile apps ask users about their preferences when they first download the app; and apps will normally have the ability to track their engagement using this data to create recommendations. In addition, they can pick up the location of the user: allowing you to send content that is geographically-specific.

Need to get a message to your customers quickly… mobile app notifications are the way to go. Email has lost a little of its lustre because it has been so overused over the last decade. However, with in-app and push notifications, you can communicate with your customers without being so intrusive.

In-app notifications are much less invasive because they require the customer to actually be using the app in order to receive them: so they are a safer bet and potentially seen as less spammy. However, push notifications are received irrespective of activity on the app: and they have also been proven to be highly effective with click-through rates as high as 40 per cent.

Apps have the ability to make use of a host of device features – from contact lists to a GPS or even phone calls themselves. For example, imagine you need some proof of identification from your user: with an app, they can utilise the camera on their smart phone and instantly submit their photograph…

Arguably the biggest difference between apps and mobile websites is that while apps often require the internet to perform the majority of tasks, it is possible for them to offer plenty of functionality – and perhaps most importantly, content – while offline. 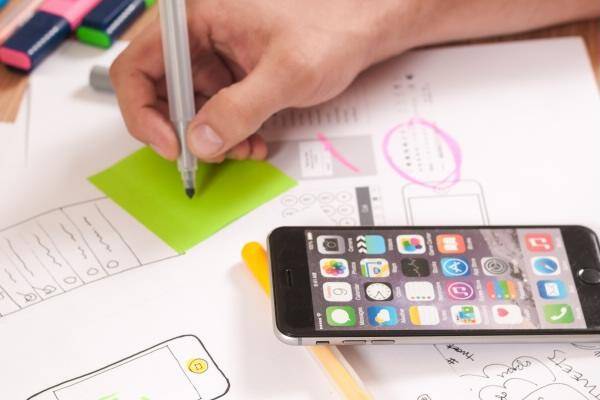 Take, for example, banking apps. They can produce tax calculations and even determine loan limits without the need for a connection. And yes, mobile websites can use cache to load pages – but they rarely offer the same tools and features.

Simply put, apps offer much more design freedom than mobile websites. You’re no longer restricted by the capabilities of browsers for your elementary functions: instead you can use a host of advanced gestures, such as swiping, dragging and tapping to create interest in your product or service.

Mobile-friendly websites generally have to reflect their original desktop version: but apps are different. They don’t face the same restrictions so it becomes possible for your company to introduce new branding and experiment a little. Of course you could just build your app to reflect your website: but the point is, you’re not limited to that. You can take things as far as you want: you might even want an app to be your testing tool before you completely refresh your image. You can even customise the app to reflect the individual user: the opportunities are endless.

Perhaps it’s the most simplistic reason of all – but the fact is that there has been a swing in usage, with statistics from Flurry Analytics in 2015 showing that mobile users are spending 86 per cent of their usage time on apps – and a lowly 14 per cent with mobile websites. Indeed, the average time being spent on apps is also increasing – leaping by 21 per cent during 2015 alone.

With people spending so much time on their devices, it’s a great branding opportunity. Even if the user isn’t actively making use of your app they are still seeing your brand just by having the icon listed on their phone. This helps to raise the perception surrounding the brand and seep its way into people’s subconscious.

Reason ten | It’s all about speed

Simply put, a decent app can usually perform its functions a lot faster than mobile website equivalents. They can store data locally, whereas websites rely on web servers. The result is that customers save their time and enjoy a better user experience.

While we are not saying you should ditch your mobile-friendly website for an app, both the app and the website should be seen as complementary services. However, if you’re choosing between the two then mobile apps are proven to offer higher rates of conversion, better personalization and smoother efficiency. It would be hard to justify not joining the app revolution.