A new-starter, a young graduate just out of university, is sat in a meeting attended by some senior managers who are discussing an important business initiative. The graduate notices a glaring error in the financial statement on the screen that the room is discussing. Feeling unfamiliar of the people in the room, recalling comments about one particular manager’s tendencies, and not being 100% sure of herself, she decides not to say anything.

What the graduate is doing is called impression management. This is an attempt to influence the perception that others in the room have about her and, whether it is conscious or subconscious, her environment is causing her to do it. Don’t want to look ignorant? Don’t ask questions. Don’t want to seem incompetent? Don’t admit weakness. Don’t want to be intrusive? Don’t offer ideas. Don’t want to be negative? Don’t critique the status quo. The answers are obvious, and unfortunately for employers, they’re effective too.

But why does this matter? Amy Edmondson, Professor of Leadership and Management at Harvard Business School points out that every time we avoid taking these interpersonal risks, we deprive our colleagues and ourselves opportunities to learn, improve and innovate. Some groups have built a culture where these risks are reduced and people are more than willing to speak up and be themselves.

Where the need for impression management is greatly reduced, the team benefit as a result. Edmondson coined the term ‘psychological safety’ to describe this group dynamic. She goes on to define psychological safety as: “a shared belief held by members of a team that the team is safe for interpersonal risk-taking…a sense of confidence that the team will not embarrass, reject or punish someone for speaking up…it describes a team climate characterised by interpersonal trust and mutual respect in which people are comfortable being themselves”.

Edmondson stumbled upon this phenomenon during a study in which she set out to find whether better hospital teams make fewer medication errors. She used a survey and a team effectiveness measure to assess several groups from different hospitals.

Meanwhile the rest of the team collected data on adverse drug errors, i.e. how many times the teams had made out incorrect prescriptions. When Edmondson analysed the data, she found exactly the opposite of what she had expected; the best teams were making the most mistakes. So, she put forward a counter hypothesis; the best team were not making more mistakes than the others, they were just owning up to more of them.

She then sent an unbiased researcher, with no prior knowledge of her study or hypothesis, to investigate. What he found was that the amount of errors correlated positively with the rating of the openness of the climate within the team (later termed psychological safety by Edmondson).

These teams were encouraged to openly report and get to the bottom of errors and they felt comfortable doing this with their colleagues. The table below shows the hospital teams and their number of reported error, sorted by psychological safety rating. 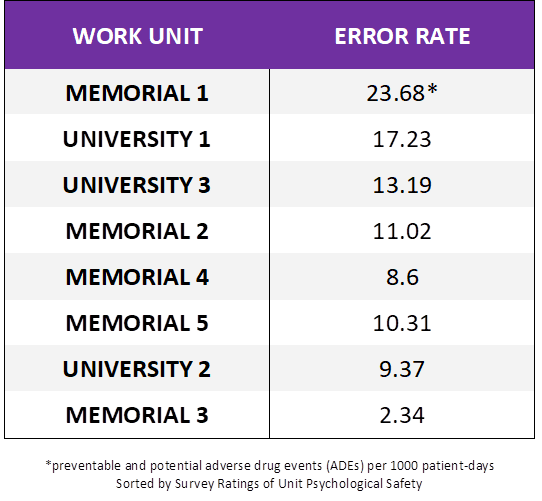 In 2012 a study by Google, called Project Aristotle was conducted to understand what made their top teams so good. Researchers scrutinised approximately 50 years’ worth of academic papers on how teams worked together and started to analyse Google teams based on the most popular theories; how often did they socialise? Were they all a certain personality type? Did gender play a role? Were their educational backgrounds similar? No matter how they viewed the data, they could not distinguish any patterns which suggested it was the ‘who’ of the team that determined the effectiveness.

Researchers began examining group norms, sometimes referred to as ‘unwritten rules’ or ‘team culture’. Amongst others, they identified two group norms in particular that were virtually ever-present in the high performing teams: ‘‘conversational turn-taking’’ and ‘‘average social sensitivity’’. Conversational turn taking is the inclination of a group’s members to speak for roughly the same amount of time during an interaction. Average social sensitivity is how good members of a team are at knowing how their teammates are feeling based on tone of voice, facial expressions and other non-verbal cues. Conversational turn-taking and average social sensitivity are key indicators of a psychologically safe work environment. This finding led the Project Aristotle researchers to name psychological safety as by far the most important trait of a high performing team.

This is good news for organisations because the idea that you need to hire the best-of-the-best in order to build a high performing team is partially dispelled. Rather, team effectiveness is significantly boosted by focusing on fostering a culture where people are comfortable to be themselves and take risks with one another. The next question is “how can we create such a culture in our teams?”. Sometimes these cultures emerge naturally as a result of good leadership or favourable group dynamics but, usually, we need to actively foster these group norms in order to reap the benefits.

The next article in this short series will look at how the best managers lead by example by being securely vulnerable.