Driving Out Humdrum From Retrospectives

The Sprint Retrospective ceremony is one of the most important ceremonies for a scrum team as this is the time when the team reviews the sprint, ways of working, existing processes and comes up with improvements/actions which will help them in becoming more productive and successful. When we started scrum, we followed the What went well?, what did not go well? and what could be improved ? brain storming retrospective for about eight sprints. It started to become monotonous and the enthusiasm level of the team went down over a period of time. I realized that changing the retrospective method every 3-4 sprints helps in keeping the team engaged to meet the purpose of this ceremony and in giving them an opportunity to assess the sprint from different perspective. Following up on the previous article “Retrospecting the Retrospectives”, I would like to share one of the retrospective methods we tried recently, which brought back the enthusiasm level and produced several great ideas for improvement.

Draw four quadrants on the board:

The Scrum Master explains the above criteria to the team and gives them 10 minutes to note the points in post-it notes and stick it to the retrospective board. After the team is done with adding all the points to board, the scrum master asks someone from the team to lead the ceremony. By giving team members an opportunity to lead the retrospective, the scrum master facilitates the ceremony as well as helps team in becoming self organized. Since we are a distributed team, we have two boards (onshore and offshore) and have volunteers at both locations to read the points from the board. The team picks up one quadrant at a time and jointly discusses all the points mentioned on both the boards for that quadrant. 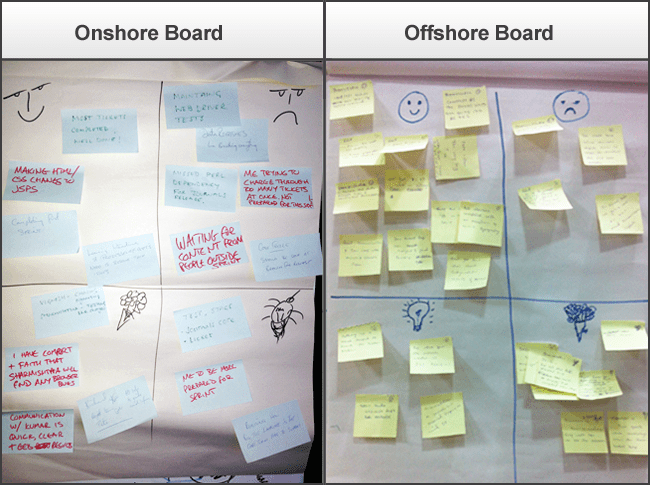 Smiley – since it contains all the things that went well, the discussion is limited, mostly everyone agrees to the points with suggestions for further improvement (if any) and some of them are appreciated and agreed as “continue doing”.

Grumpy – this is the quadrant where all the things that need improvements are noted and the team mostly discusses how these instances affected their pace etc and what could be done to address them in future making less or no impact in meeting their goal. The outcome of the discussion on each point is noted down by scrum master and marked as actions for the sprint.

Bouquet – this quadrant and the next one is what differentiates this retrospective method from other methods. Team members appreciate others in the team who helped them in completing the story or just to appreciate the good work done. A lot of positivity is seen while going through this quadrant. It is good to see the team commenting on and discussing all the various appreciations.

Bulb – This is where team members share new ideas which the team should try to either solve their existing problem or for simply getting better at something. The points mentioned in this quadrant are discussed and if it is agreed by everyone to be helpful, adopted.

Vignesh plays a role of Scrum Master at Arrk and is passionate about software development using Scrum. His other interests are Project Management, Management Reporting and Risk Management.