Open source software may be a buzz term in the technological sphere, but the concept is one with a rich history that pre-dates the internet and even the personal computer. For example, it was back in 1911 that Henry Ford won a challenge to the Selden patent: presenting a cross licensing agreement between US automakers that allowed patents to be shared without the exchange of money.

Of course today, open source has taken on a new meaning: generally used to refer to a computer programme with a source code that is available to the public allowing them to make a collaborative effort on developing a programme. Its popularity has surged – indeed there are more than 3.5million websites using the content management system WordPress alone, according to Highcharts.com. 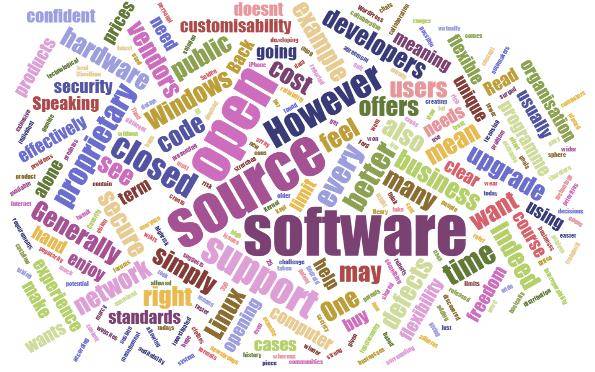 However, is open source software right for your business? Here we investigate the pros and cons.

You might think that opening up software to the public would create an array of security issues: however, experience suggests something very different. Back in 2010 for example, 88 high-risk defects were found in Android Kernel because it uses open source software – Coverity examined its code and discovered 359 defects, of which 25 per cent were deemed high risk.

Of course, you won’t read as many reports about defects in Windows or the iPhone: but that doesn’t mean they are more secure. It simply means these products are closed from the view of the public and therefore fewer people can examine the bugs they may contain. By opening up to open source software, problems tend to get fixed a lot faster: with closed source software a problem usually has to be reported, then investigated… creating potential delays before the solution is released.

If there is one thing that is unique about today’s society, it’s that everyone wants to be unique. That stretches from the clothes they wear to the technology they use and many want to tweak software to suit their individual needs. With open source software this is possible, with closed software it is not. So now users can enjoy a better experience by adding the functionality they want.

Going hand in hand with customisability is freedom and flexibility. Proprietary software limits your business’s vision: you are effectively at the mercy of the vendor’s own priorities, prices and requirements. However, with flexible open source software your business can make its own decisions about what it wants from software and it has a wide network of developers to help it achieve its goals.

Indeed with software such as Windows and Office you are effectively placed on a treadmill: given a time limit by which you must upgrade your software and hardware. Generally speaking, open source software is much more flexible and easier to sustain on older hardware: giving you more time to upgrade based on your cash-flow and needs.

If you want easy collaboration with other businesses, users and computers then open source software is a clear winner. Proprietary software will limit you with its data formats: whereas open source offers wider, open standards.

Every time you buy closed source software you are taking a gamble: you basically have to trust the vendor’s word that the product is being kept secure and that it adheres with the latest standards. With open source however, you can see for yourself how strong the code is: and this also opens up an extensive support network.

Generally, there are huge communities surrounding each piece of open source software. Just take a look at Linux for example (see Why Linux is more secure than Windows): virtually every distribution comes with its own network that ranges from live support chats to forums, newsgroups, wikis and documentation. If you feel you need extra support verification to feel confident with your business, then there are usually paid support options to accompany most open source software with prices significantly below those that most closed-source vendors will charge.

Speaking of cost, there’s no doubt that open source steams ahead of its rivals in this regard. From the initial cost of the software itself, to upgrade expenses, support charges and virus protection: open source is cheaper the vast majority of the time, and in almost every step of the way.

So is open source right for every organisation?

Read this article and it’s clear that there are many advantages to open source software. However, that doesn’t mean you should be dogmatic about it.

There are a number of cases in which proprietary software is still a better choice. One is that while open source systems like Linux are technically superior, its weaknesses mean that lower skilled users will find it less appealing to work with. Indeed there are cases too when proprietary software offers better support; is better suited to your hardware; or simply offers a more reassuring warranty package to help you feel confident using it going forward. Most closed source software also tends to be produced by successful commercial ventures: meaning that their products may be more likely to stick around in the long term.

However, with open source software you can enjoy software developed by thousands of developers instead of simply a handful of developers: and that fact alone should tell you all you need to know about the difference in quality.

With open source you also have the chance to try before you buy: so why not give it a test drive and see if it’s right for your organisation?