A Guide to Usability Testing Success

It is often said that usability testing is a necessary evil of software development, it is said by some to disrupt the development process whereas others find it takes too much work to properly instigate. What is often forgotten is that there is tremendous value in observing real users working and interacting with an application, prior to release.

At Arrk Group, we are firmly of the belief that usability testing can be enormously beneficial for teams at various stages of software development. A recently undertaken customer project further highlighted this belief, with the customer not only finding the outcomes enlightening but the usability issues flagged up during these sessions were immediately prioritised to be taken up in the next development release.

How we Usability Test

At Arrk Group, Usability Testing has been carried out for applications which are in-use but the success with the Usability Testing framework along with our EmbArrk sessions has convinced us that Usability Testing can be successfully performed earlier in development projects, for example as early as when draft UI / mock-ups are produced. Usability Testers are selected from Arrk Group’s systems administration team, with a team of Testers selected on the following criteria:

Usability testing can incorporate both internal and external people, the important aspect is to create an end-user representative sample size to make session outputs meaningful.

Our framework consists of five sections.

In this first stage, resource allocation, scheduling, test strategy and Test team recruitment is determined. In case of external participants look to arrange and confirm session dates, with draft session itinerary where possible, also agree any participant incentives for completing usability tests. We work collaboratively with the customer to develop and agree the Usability Testing objectives and prepare detailed participant profiles. 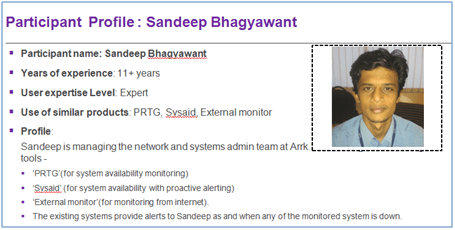 One testing team member is selected as moderator for a specific session and where a project requires multiple Testing sessions an alternate moderator should be selected. We do this because every moderator has their own style of running a session and switching between observer and moderator roles helps to foster learning. An example of Usability Testing objectives might include:

Test preparation involves defining tasks for the participant(s) to perform, setting up the test environment and publishing the final schedule to all the involved parties. So what works as a test script?

In advance of a Usability Testing session an appropriate environment is required, with all tasks tested to ensure correct behaviour of the application and prevent any surprises. When setting up a test environment, consider:

The moderator should take responsibility for ensuring a smooth Usability Testing session, ensuring that all participants are welcomed and thanked, including an explanation of what is involved and how long it should take, as well as obtaining consent to record some or all of the session. 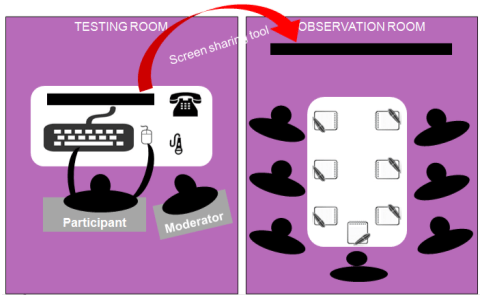 Consideration should also be given to asking participants to sign non-disclosure agreement forms. Remember that the session is not about testing the end user, merely their interaction with the application. Care should be taken in clearly expressing this to remove any apprehension the participant may be feeling.

To ensure observation is successful, Arrk Group operates an ‘active’ observation, which means observers should:

The observer team should also record the length of time taken by participants on tasks, number of misfires, issues with the test itself and other key metrics.

After the completion of any Usability Testing session the moderator and observation team should gather for a de-brief to discuss and consolidate findings. Information gathered should be grouped into common themes, with any suggestions shared to improve subsequent sessions. The Testing team should refrain from providing solutions at this stage as there might be further Usability Testing sessions scheduled and alternative findings might be recorded. Once all Usability Test sessions have concluded a final Data Analysis De-Brief is held where all stakeholders meet to discuss findings and prioritise any usability problems which have arisen from the sessions. Some of the frequently found issues which are raised during Usability Testing sessions include problems with search filters, screen layouts, colours and font usage, help buttons and general sizing issues.

Usability Testing should be considered a key component in software development, if an application is to thrive. Users are diverse and complicated, and if an application fails to meet their needs or is counter-intuitive, it is unlikely to succeed. By sampling end-users before releasing an application, the likelihood of the application being ‘user friendly’ is increased. Furthermore, Usability Testing can also provide highly valuable feedback which can feed back into the development of the application. Usability testing fills a pivotal need and complements the other methods of validation like functional testing, performance testing, and accessibility testing. At Arrk Group, we are convinced of its merit in high quality software delivery.

The three roles of Usability Testing:

The driving force behind the Usability Test mechanism and if Usability Testing was a team sport the moderator would be the captain. The effectiveness of a moderator can make or break a test. The moderator needs to understand usability aspects, its rationale, must be communicative but not overly and must be people friendly.

The moderator role consists of the following:

The observer is someone who attends the test and records some or all of the participants actions, observers could be members of the development team, managers, and members of other companies who are developing interacting products. The observing team is usually located in a different room and observe the participant’s actions of the test tasks, recording them for future analysis and design decisions

Diversity of roles helps in an observation team. At Arrk Group, we include a mix of lead developers, management and UX experts.

The participant takes the role of the end-user, performing set tasks and provides honest feedback on a range of application elements. Participants play a vital role in Usability Testing and their contributions can have a profound effect on the development project and should be carefully selected based on the sample profile of the end-user and their ability to articulate their feedback to the moderator and observers.

At Arrk Group, we often use questionnaires to screen participants on the basis of whether they fit the profile of a real end-user. Characteristics considered can be as simple as age, gender, social indicators and field of work. Reward incentives are often provided to the participants for their time.